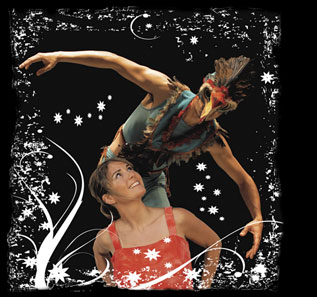 I had been thinking about making a piece for children for a long time. First of all because children deserve to see beautiful things and also because I believe that they need messages of hope in these dark times. And I want to make them fall in love with dance, to leave the theatre saying, “I want to dance,” which is what happened to me when I was a girl. Besides, children make the best audience: they watch without preconceived ideas, they enjoy without being ashamed, and they comprehend without doubting their own ability to comprehend.

Inventana is basically the story of a little girl who feels trapped in a colorless, asphyxiating world. She dreams of going far away and seeing other lands. Through her imagination she travels to different places, where she meets fantastic creatures. The work is about reality and imagination, solitude and friendship, fear and courage.

The creation process has been wonderful. All of the artists in the Company collaborated closely, taking the project on as their own. People often say to me, after seeing the piece, “What came first, the music or the dance,” and the truth is that it's hard to tell. I would tell Paco the idea that I had and his musical response would in turn give me a hundred more ideas. Sometimes we would work in the other direction: he would watch a section of movement and then compose the music for it. Isabel sat through countless rehearsals, watching, drawing, and the costumes she created came directly from the dancers' movement. We would discuss the script for hours and often her suggestions would lead to new choreographic ideas. Patxi's masks brought the characters to life. And Carlos, as always, brought everything together with his lighting. But the deepest collaboration of all took place day after day in the studio with the dancers: Ion, Josune, Diana, Leti and Txori were as immersed in this project as I was. We worked a lot from their improvisations, so a lot of the movement in the piece is theirs. It's their expressivity and creativity that makes this piece so moving. And it's seeing how much this piece is theirs that makes me enjoy watching them so much. This is the first time that I'm not dancing but it hasn't been a traumatic step at all. On the contrary, I'm filled with gratitude and joy at being able to express myself through these five wonderful dancers.

Tempomobile enters the world of childhood to create a work full of fantasy, humor, magic, adventures, and hope. Inventana tells the story, using the language of dance, of a little girl who escapes her monotonous existence by means of her imagination. With choreography that is rhythmic, expressive and forceful, supported by colourful and evocative costumes and masks, Tempomobile aims to captivate a new audience for dance as well as to keep surprising and moving the audience that is used to seeing dance.

It all starts in the most mundane reality, a colorless world. The mother seems more a witch than a mother and is determined to impose order, to knock some sense into her daughter, creative and joyous. A huge bird comes to her window and invites her to fly away with him to far away lands. And there begins an exciting journey to unknown places, full of color and surprises, inhabited by strange creatures. In the end the little girl returns to reality but now it's full of color because her imagination has been able to transform it.

Inventan a is a coproduction between the Auditorio de Barañáin, the Patronato de Cultura de Zizur Mayor and the Teatro de Ansoáin, with support by the Government of Navarra. It had its debut on September 29th in the Auditorio de Barañáin (Navarra, Spain), and in its first two weeks it filled theatres eight times, all within the metropolitan area of Pamplona, captivating and moving audiences of all ages.