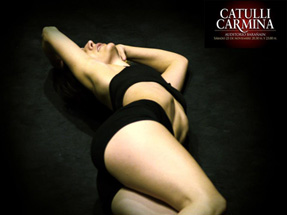 The love poems of Catullus, the Roman poet from the first century B.C., are the source for Catulli Carmina, a cantata composed by Carl Orff and first performed in Munich in 1943. A bridge between antiquity and modernity, this key work of the German composer has been overshadowed by his Carmina Burana, which belongs to the same triptych. The work was originally intended by Orff to be a ballet, but perhaps because of its complexity, few groups have undertaken its staging. The Coral de Cámara de Navarra, under the direction of David Guindano, has decided to recover this beautiful, passionate and seductive work.

With original choreography by Becky Siegel, Tempomobile presents this powerful ballet that speaks of love, friendship, betrayal, and the creativity of the tormented mind. The dance and the music allow Catullus’ sublime and timeless texts to continue to speak to us after thousands of years.